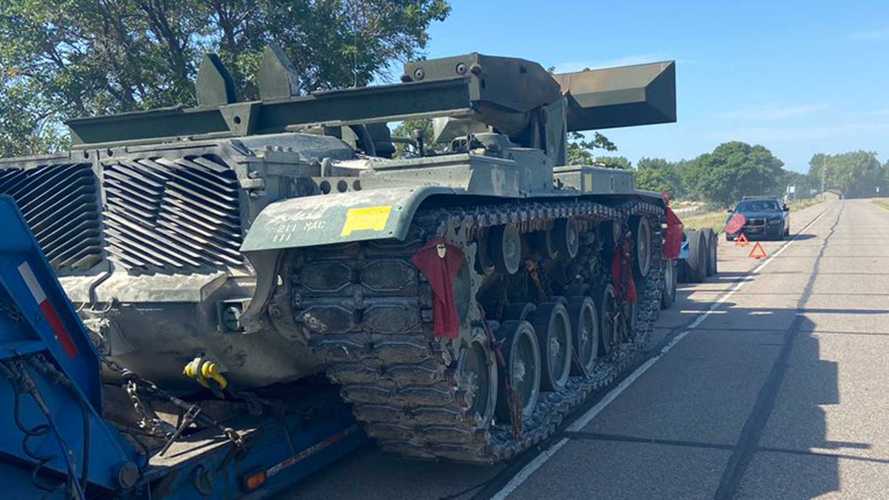 Massive Tank Abandoned Next To Nebraska Highway, Nobody Knows Why

For the most part, Interstate 80 through Nebraska is a rather scenic if boring drive. It literally slices through the heartland of America’s Midwest, with Omaha being the only significant city on its 460-mile span of concrete. You’ll see lots of cornfields, wide-open plains, and big blue skies on this stretch of road. One thing you won’t see is a ginormous tank on the shoulder. Most of the time, anyway.

And yet, that’s exactly what motorists on I-80 came upon recently. The Nebraska State Patrol responded to reports on August 20 about a trailer carrying a large, tracked military vehicle sitting on the shoulder of an on-ramp. It was located near the town of Overton in the south-central region of the state, and it was just ... sitting there. In this instance, the definition of tank is a bit loose, as this vehicle reportedly is an armored engineering vehicle devoid of guns. Still, it has big honking tracks and could engage in front-line military conflicts if necessary, so we’re calling it a tank.

The vehicle belongs to the South Dakota National Guard, and it was reportedly being returned to the state after a training mission in California. It was likely returning to Sioux Falls – hence its trip across I-80 that would've connected with I-29 for a quick jaunt north. The mystery deepens on this encounter, however, as it’s unknown why the trailer was dropped along the highway. Apparently there was no sign of damage or problems, and the whereabouts of the truck and its driver are unknown. If that sounds a bit weird, you’re not alone in that assessment.

For now, steps are being taken to get this big boy back to its South Dakota Home. If we hear fresh news about the driver and the reason for all this, we’ll jump in with an update.