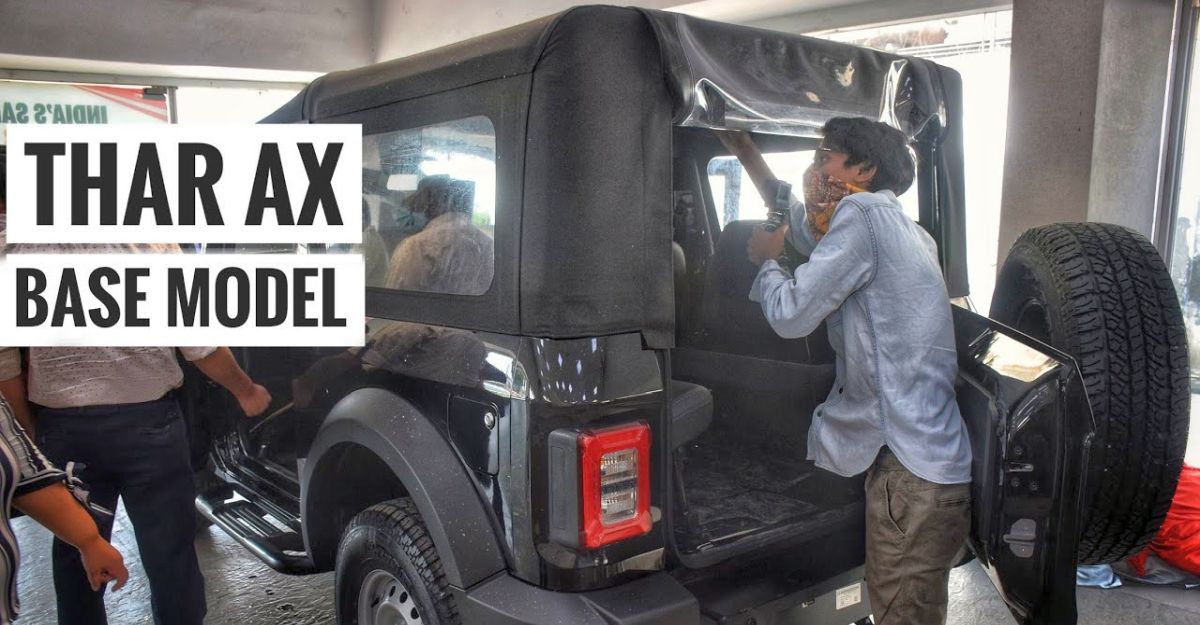 Most affordable 2020 Mahindra Thar: Base AX trim in a walkaround video

Mahindra officially announced the prices for the all-new Thar recently and the bookings for the same have also started. Mahindra will start delivering it from 1st of November 2020. Meanwhile, the SUV has already started reaching the dealerships and the pictures and videos of the same have also surfaced online. So far, all the videos that we have seen so far show, the top-end trims of the SUV. Here we have a video that shows how the base variant of Thar looks like and the features it offers.

The video has been uploaded by Syed Sameer on his youtube channel. The video starts by showing the top-end hard top model. On the other side of the dealership, they had displayed the base AX trim of the SUV. It comes with a soft top and even that looks pretty good. The black colour on the Thar gives it a premium look, even if it is a base variant.

The main difference on the outside are the absence of fog lamps. The version seen in the video does not get fog lamps. Apart from the missing fog lamps. the AX trim gets 16 inch steel rims in comparison to the 18 inch alloys in higher variants. It is available with a soft top and the the spare wheel is mounted on the door itself. Even base version gets LED tail lamps. The ORVMs are manually adjustable and the soft top can be removed as well.

On the inside, it gets a simple looking cabin with no touchscreen infotainment screens, multi function steering and speakers. It however gets power windows which was missing in the earlier version. The instrument cluster remains the same as the higher trims. The rear seat however is different in this base AX version.

The base version gets side facing seats for rear passengers which allows it to accommodate 4 people at the back. This makes base AX version of Thar a 6-seater whereas the higher trims remain 4 seater. It is available with the same set of petrol and diesel engine options with 4×4 option. The petrol version is powered by a 2.0 litre mStallion turbocharged unit whereas the diesel version is powered by a 2.2 litre turbocharged unit. Both petrol and diesel get manual and automatic gearbox option.