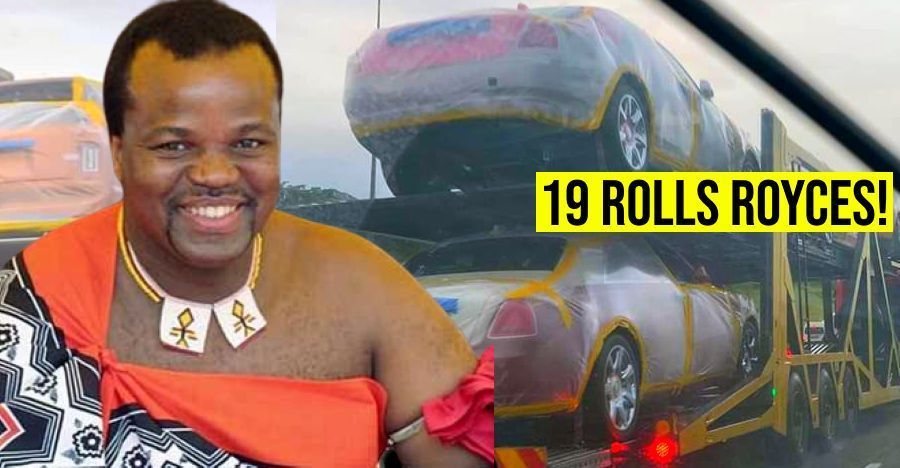 If you ever become super-rich, will you buy multiple Rolls Royce cars in one go? Well, here is the King Mswati III of Eswatini, who ordered as many as 19 Rolls Royce sedans among many other luxury cars! Formerly known as Swaziland, the King is head of the Swazi Royal Family and rules the poverty-stricken African nation. He splurged a sum of $24.4 million, which roughly translates into about Rs 20 crore on buying as many as 120 BMW sedans only a few days after the Rolls Royce arrived.

The king has as many as fifteen wives and the Rolls Royce were distributed as gifts to all the wives. The reason for importing 120 BMW sedans are not known yet. The king lives his life oversize and owns an exotic range of high-end cars. Not to forget he owns the most expensive garage in his country and one of the most expensive garages in the world. While the exact details of the cars owned by him are not known, there are at least 20 Mercedes-Maybach S600 Pullman limousines. Also, there is a rare Maybach 62 and a BMW X6 in his garage among all other cars.

The exact Rolls Royce cars ordered by the king are not known. However, there were 19 trucks that delivered the cars to his mansion and a mix of Ghost, Phantom and Cullinan were spotted.

The opposition party of Eswatini – People’s United Democratic Movement released a statement about the king,

Last week (early November), a total of 19 Rolls-Royce cars were delivered to Swaziland for the exclusive use of the king, his mother and his wives. To say this is a blatant display of arrogance and total disregard of the poor people of Swaziland’s feelings by the monarch would be an understatement. As a party, we are least concerned about how many wives and children he has. The big issue is that the national purse has to take care of someone’s children when ordinarily in modern politics there is supposed to be a separation between his private resources and the public purse. The Swazi political system is meant to serve the monarchy and its cronies, not the people.

Ambrose Mandvulo Dlamini, Prime Minister of Eswatini says that this is not a buying spree and the vehicles have been ordered while following an official policy of the government. According to the rule, the vehicles used by the king has to be replaced every 5 years. The country’s 63% population lives below the poverty line.

Splurging money and living a life that most of us can only dream is great but not when the country is poverty-stricken. Eswatini is a small country landlocked between South Africa and Mozambique. The latest spending spree from the richest man in the country and attracted a lot of attention on the international circuit. The king has been criticised for ignoring the people of the country and spending an excessive amount of money on luxury items.