The rendering image is made by Vipin Vithoopan, our talented in-house rendering artist. The all-new Thar gets a new grille, which has been one of the most talking-points when it comes to the design of the all-new Thar. Since it gives a new identity to the Thar, we have not removed it from the rendering image. However, we are almost certain that there are many would like to change the grille as soon as they are available in the market.

This rendering image does not get too many modifications. The first thing that you will notice is a new bumper. There is an electrical winch too, which can prove to be very handy while doing off-roading. The all-new Thar already looks quite muscular and intimidating on the roads. But with this lift kit and massive aftermarket tyres on off-road spec rims makes it extremely dominating. Since it sits higher on the ground, there is a stepper on the side. The headlamps of the all-new Thar are already bright but for some extra brightness on the dark trails, there are LED auxiliary lamps.

Even though the all-new Thar comes with a water wading capacity of 650mm which is quite deep, with the larger tyres and lift kit as in this render, the wading ability should improve even further. That’s why you do not see a snorkel on this rendering image. No doubt, it would have made the all-new Thar even more off-road-approved design. 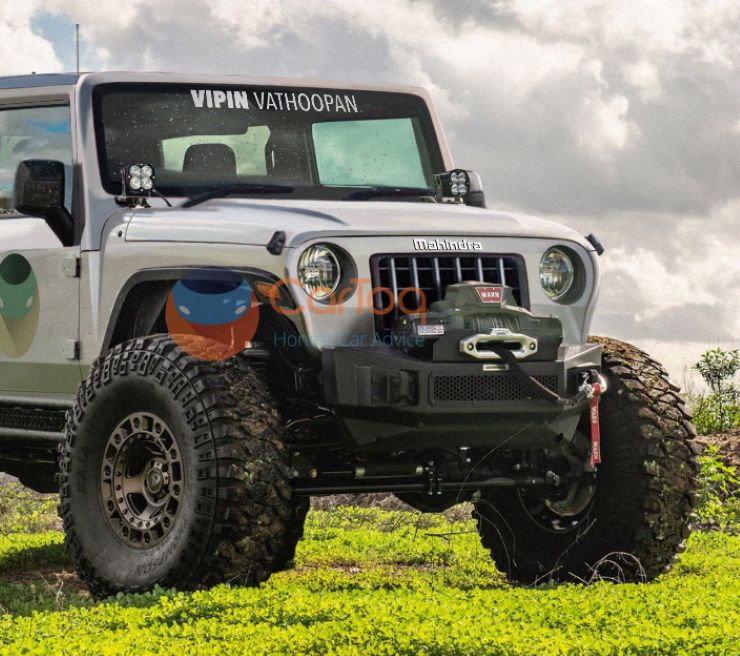 It should be noted that Mahindra officially offers a range of aftermarket accessories and factory-customisation options. There were several factory-custom designs available with the previous generation of the Mahindra Thar and we are sure, there will be quite a few options for the all-new Thar as well.

For the first time, Mahindra is offering an automatic transmission with the Thar. The 6-speed automatic transmission will be available with both diesel and petrol engine. The 2.0-litre mStallion petrol engine is also the first gasoline engine with the SUV. It also gets a host of other updates and many first-time features like roof-mounted speakers, front-facing rear seats, touchscreen infotainment and more