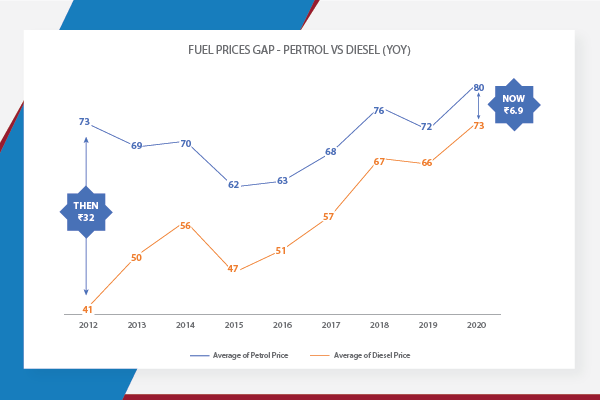 How Petrol Engines Caught up with Diesels

If ever a word did justice to petrol cars, it has to be “whooshhh”!

The “whoo” defines its speed off the block, and the “shhh” bears proof of how quiet they can be.

Had it not been for the “kitna deti hai” phenomenon and a significant price gap that opened up between the two fuel types in early 2010s, diesel-powered cars would, quite literally, have eaten dust. Of course, the strong mid-range the diesel vehicles boasted was also a saving grace.

So, let’s look at how, step-by-step, petrol engines have clawed back the advantage, to the point where diesel-powered cars don’t make sense for anyone except a few with unusually high usage.

Petrol vs Diesel Round 1: Diesels hold the edge

In the early 2000s, almost all small cars were powered by 800 cc to 1-litre petrol engines. This was because a small engine was deemed to maintain a fine balance between fuel efficiency and power for most drivers. Increasing capacity and power meant compromising fuel-efficiency. In fact, it meant opting out of small cars and entering the territory of sedans, which came with larger, more powerful engines.

No points for guessing that two decades ago, diesel vehicles, though few, delivered more torque and higher fuel efficiency to put the petrol-powered ones to shame.

Petrol vs Diesel Round 2: Petrol claws back

That changed, swiftly, when Maruti Suzuki India Limited launched its hugely successful premium hatchback, Swift, which came with a 1.3 litre petrol engine that was good for 88 PS of power. This was a game-changer: a car that was the most fun-to-drive, and proved that petrols could also deliver decent fuel efficiency. In fact, the Swift offered 12.36 kmpl, as per ARAI, a pretty good number for 2005.

Petrol had almost caught up to diesel in terms of efficiency, but the fact that their automatic versions had very poor fuel efficiency robbed it of the spotlight.

The Big Shift: The Rise and Rise of Petrol

The advent of K-series engines in 2008 marked the beginning of the big petrol fightback. The K-series engine produced 10 percent less friction than its predecessor. It was an all-aluminium block, which meant that the engine, and as a corollary, the car, weighed less. The cylinder was optimised, and a lighter piston, which moved easily, helped the car reach the power band much faster. The engine’s stiffness and a silent timing chain improved NVH levels. Advanced injectors ensured optimum combustion, which improved performance. The Swift K-Series petrol engine now produced 83bhp but the fuel efficiency went up to 18.6 kmpl.

K-Series gets a Boost

It featured dual variable-valve timing and low-friction engine oil which delivered even greater efficiency. The new modified engine used two injectors per cylinder instead of just one. This helped in more precise control over the fuelling as the fuel could be broken down into even finer particles. The finer the particles, the more they spread over the surface area. This makes the fuel-air mixture easier to ignite, greatly improving combustion efficiency.

Further, the embedded Idle Start-Stop (ISS) function turns off the engine if the gear lever is in neutral and the foot is off the clutch. The engine comes back to life as soon as you press the clutch.

All of this combined not only helped boost the performance of the engine but also fuel efficiency. To boot, emissions were drastically reduced. The engine now offers a class-leading mileage of 23.26 km/l in Dzire while producing a healthy 88bhp.

What about the Petrol Automatics 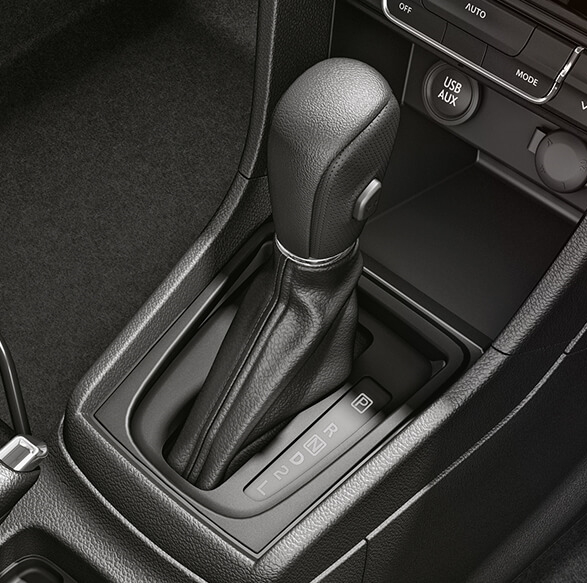 As said earlier, petrol automatics delivered 33% less mileage than the manual version. For a car that returned 15 kmpl, its automatic version did just 10 kmpl. MSIL addressed this with the introduction of AGS or Auto Gear Shift technology in 2014. It first debuted in Celerio but is now available with Swift, Dzire, Wagon R, S-Presso, Ignis, and the Celerio X. With time, the efficiency, smoothness, shift times and the behaviour of the AMT also improved.

The great bit about AGS is that the auto variants cost just Rs. 40,000 to Rs. 50,000 more [earlier, with conventional automatic technologies, the difference was about Rs. 1 lakh] and return the same or even higher mileage as non-auto versions. For instance, Maruti Suzuki DzireVXi AMT costs just Rs. 52,000 more than the manual VXi variant. Also, the automatic variant returns an ARAI mileage of 24.12kmpl whereas the manual variant returns a mileage of 23.26kmpl.

Twenty-kmpl-plus mileage was unheard of for petrol cars at one time. It now is the norm, thanks to advances in engine technology and better power to weight ratio. Diesels, at best, deliver a few kmpl more but cost much more. And now, with the differential between diesel and petrol fuel prices becoming negligible, there is a strong case for switching to petrol cars for all but except for a very few cases where usage is extremely high.