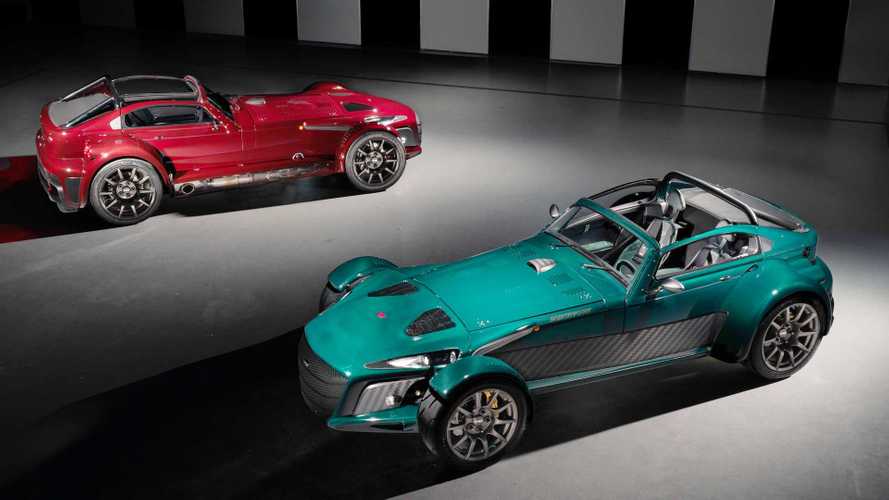 Donkervoort Automobielen has taken the clothes off its D8 GTO-JD70 with the long-planned Bare Naked Carbon Edition (BNCE).

Available with either clear or coloured lacquer, the Bare Naked Carbon Edition gives the JD70 a stunning, high-art texture and highlights the precision of Donkervoort’s carbon-fibre expertise, all while making the 700kg car several kilograms lighter.

JD70s with BNCE technology can be delivered in a raw, naked carbon look or with a coloured lacquer coating in either matte or polished finishes.

The first production car in the world with 2G of cornering muscle, the JD70 was developed as a tribute for the 70th birthday of Donkervoort founder, Joop Donkervoort. The BNCE, though, has been developed to help personalise every JD70 Donkervoort builds.

BNCE developed to give customers the opportunity to lighten and customize their cars beyond the usual colour palate.

“The woven carbon remains the same,” Donkervoort Automobielen Managing Director Denis Donkervoort explained.
“We use specially developed inks mixed into the clear coat to create the look of the colour in the fibre.

“We can also match the interior coloured carbon pieces to the exterior bodywork,” he confirmed.

More than 95 percent of the standard JD70 bodywork is in carbon-fibre and the BNCE program, which we began in 2018, allows owners to see what they’ve paid for.

The bodywork of the JD70 is made of a carbon-fibre/Kevlar weave and even the cycle wings are carbon-fibre/Kevlar.
The entire front design is now new compared to the GTO-40 and all of the vented pieces are hexagonal in design and they are all made from 3D-printed carbon-fibre.

BNCE
Developed after a request from a customer in 2018, the BNCE idea can be delivered either in either a high gloss or a matte finish.

Donkervoort has delivered several cars with the BNCE bodywork to knowledgeable enthusiasts already, but BNCE is now being made more widely available.

Donkervoort offers its customers four levels of carbon-fibre exposure, from the relatively subtle “exposed-carbon upgrade” up to the art package of the “full exposed carbon” option.

Exposed Carbon Upgrade: The entry level to the world of visible carbon shows off exposed carbon (in either matte or gloss coats) for the side panels, the engine-bay wings, the bonnet scoop, the triangular cover scoops and the full interior.

Full Exposed-Carbon upgrade: This shows the complete car in exposed carbon, including the exhaust cover. It reduces weight significantly.

Full-Exposed Coloured Carbon: Donkervoort delivers the complete car in coloured carbon, including the side-exhaust cover. It is an upgrade that could be added to the Full Exposed-Carbon upgrade.

Colours for the full, exposed coloured carbon versions are available on request, but so far include green, red, blue, gold and grey, and metallic can be mixed in as well.
The D8 GTO-JD70
The hypercar-slaying Donkervoort D8 GTO-JD70 legend will smash through the 2G barrier to deliver the astounding cornering ability to match its crushing acceleration.

It is a supercar for people who ache for the heightened senses and the purity of unfiltered driving experiences, and the JD70 has been designed to allow drivers to form an unshakeable bond with their machines.

It is a comfortable on city streets in heavy traffic as it is on the open road.

“The JD70 has moved beyond the normal measures for acceleration and braking and we’re using G forces now, but the car is still a pure driver’s machine like nothing else on the market,” Donkervoort Automobielen managing director Denis Donkervoort said.

“The JD70 is the distillation of everything we know and everything we’ve learned on the road and the racetrack, from track days and from customer talks and, of course, from Joop’s own ideas on what a supercar should be to its driver.”

The D8 GTO-JD70 starts from €163.636,36 (before taxes). The new final-drive ratio does help to improve the fuel economy. Even with all of this speed, the JD70’s official CO2 emissions figure per kilometre will be just 191 grams.

That won’t be the end of the powertrain story, though, because a strong relationship with Bosch has delivered rev-matching software for downshifts and even added a full-throttle upshift mode for more spirited driving.
Power With Control
The most powerful Donkervoort ever made, the 2.5-litre, in-line five-cylinder motor generates 415bhp (310kW) of power and 520Nm of torque.

The engine delivers its peak torque from only 1750rpm and holds it until 6350rpm – a point in the rev range where most cars are developing their peak power.

Its layout matches that of the previous D8 GTO-40, providing enough engineering familiarity to comfort loyal Donkervoort fans and enough raw performance and character to draw in new customers.

Incorporating a new catalyst system, the exhaust pipe exits the side of the car ahead of the rear wheels, which reduces weight thanks to shorter pipe lengths, and it has also been tuned to deliver an even more emotional engine sound into the car.

It uses a close-ratio, five-speed manual gearbox, which drives a custom-developed limited-slip differential on the rear axle.

The biggest change to the driveline has been the lengthening of the final-drive ratio from 3.63:1 to 3.31:1, to take advantage of the engine’s stronger low-end performance and to provide longer highway legs.

The new final-drive ratio improves the fuel economy, with the JD70 posting a WLTP CO2 emissions figure of just 198 grams per kilometre.

At the core of the JD70 is a hybrid chassis technology that combines a tubular steel ladder frame with carbon-fibre for added strength and aluminium to reduce weight in less critical areas.

The coil springs are custom made for Donkervoort and the front and rear anti-roll bars are also adjustable, as is the variable traction-control system.

It uses Tarox wave-pattern 310mm x 24mm discs and six-piston, monobloc calipers at the front and smaller (285mm x 24mm) wave-pattern discs and a single-piston caliper setup in the rear.

One of the major changes has been the switch from Toyo to Nankang as the original equipment tyre supplier.
The Nankang compound is harder, and delivers longer tyre life, yet it provides more mid-corner grip and helps the JD70 beyond the 2G barrier. The front tyres are 235/45 17 in size, while the rear end uses 245/40 18 tyres.