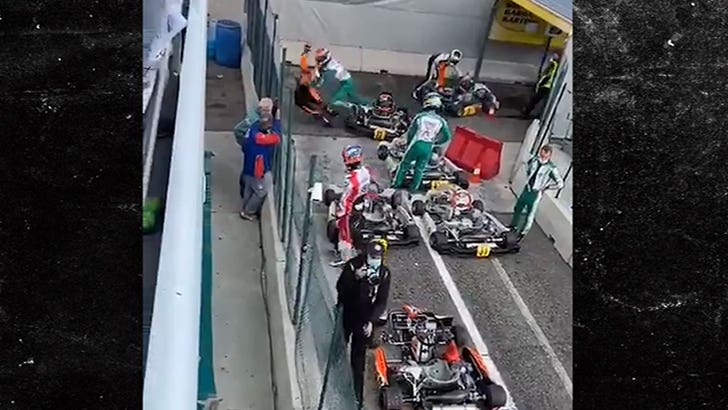 Italian Kart Driver Throws Bumper at Other Racers on Track

Italian kart driver Luca Corberi took road rage to another level and put racers' lives at risk ... when he threw a temper tantrum and a bumper on the track as they flew by.

The insane incident went down at the FIA KZ World Championship Sunday after Corberi was reportedly disqualified for coming into contact with another driver.

Instead of bowing out like a professional, Corberi chose to stand by the side of the track with a bumper that had fallen off ... and waited to throw it at a passing driver.

Problem is, it seems he missed his target, and the bumper pinballed around on the track before striking another driver. Luckily, it looks like nobody was hurt, and nobody lost control of their karts due to Corberi's bumper toss.

The announcer was baffled by his behavior, and said ... "I'm sorry, that is absolutely unacceptable."

The angry 23-year-old driver wasn't done though, and physically attacked the racer he initially threw the bumper at after the race was over. This led to a brawl involving several other drivers until everyone was separated.

Already, kart racing fans are calling for a lifetime ban for Corberi's actions ... which certainly could have killed someone.